The Finley Collection of books and maps related to the history and romance of the Old Northwest Territory was a collection initiated in 1928 by Edward Caldwell, Knox College Class of 1886. 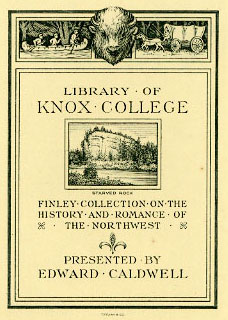 The collection has continued since then to grow and now contains the essential titles related to exploration and early development of this part of the Midwest. Particularly strong in the area of the Military Tract, the Finley Collection is one of the most extensive collections of pre-1850 materials documenting the growth from the prairie. The collection is used by researchers across the country and by Knox's own students.

Edward Caldwell was an affectionate alumnus and rare book collector himself. He gave the first books to the new Seymour Library and asked that the collection be named for his friend, John Huston Finley. Finley had also attended Knox and while a student compiled a catalog of the college library holdings. More about this can be found at this online exhibit site: Before Seymour: A Brief History of Knox Libraries. 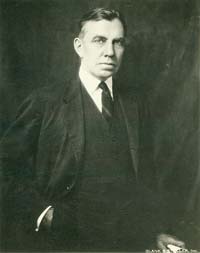 John Huston Finley (1863-1940) attended Knox College and graduated in the class of 1887. In 1892 he returned to Knox to be the President of the College and at the time he was the youngest college president in the country. During the seven years of his leadership, Knox became less of a college out on the prairie and much more an institution with a national reputation. He encouraged the development of Founders' Day and initiated the Lincoln-Douglas Debate celebrations which brought dignitaries and the spotlight to campus. Furthermore he brought significant and modern changes to the curriculum and the campus social life.

After leaving Knox in 1899, Finley continued a career in education. He served as the President of City College of New York and later the New York Commissioner of Education. During WW I he served with the Red Cross as the head of operations in Palestine and the Middle East. In his later career he assumed various editorial positions, including associate editor, at the New York Times from 1921 to 1940. 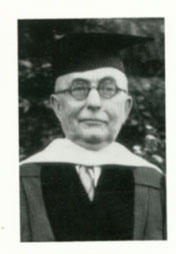 Edward Caldwell (1861-1949), editor and president of McGraw-Hill, was an enthusiastic collector of rare maps and books. He attended Knox but received his A.B. degree from the University of Michigan in 1886; two years later an M.E. from Cornell University. His interest in Knox College remained strong after his graduation. In addition to the gift of the Finley Collection, Edward Caldwell continued to support Seymour Library and Knox. In 1931 he organized the Friends of the Knox College Library. He and Earnest Elmo Calkins, Class of 1891, established the Fifty Year Club in 1945 as an organizations for older alumni. Caldwell was a Knox College Trustee from 1923 until his death.