Knox County in the Military

The introduction from History of Knox County (Albert J. Perry, S.J. Clarke Publishing Co, Chicago, 1912 pages 242-243) has this to say about Knox County's involvement in the war:

"In the Civil war there were only seven counties in the state that furnished a larger number of soldiers than Knox county, and none that filled their quotas more promptly. Knox county was called upon to furnish 3,842 men, but finally credited by the adjutant-general of the state with only 3,837. There were many who left the county to enlist in foreign regiments, and the colored troops to the number of from twenty-five to fifty were never credited to Knox County."

The 77th Illinois Infantry Regiment was established in Peoria, Illinois on September 2, 1862. A number of Knox County, Illinois men enlisted, including Edward W. Jenney who sent home photographs of some of his comrades.

“The 54th Regiment Massachusetts Volunteer Infantry was the first military unit composed of men of African descent to be raised in Massachusetts. The first members assembled in February 1863. The unit soon included members from Massachusetts and from other states. Thirty men from Illinois joined the Regimant, including twelve Galesburg men in Company H.” 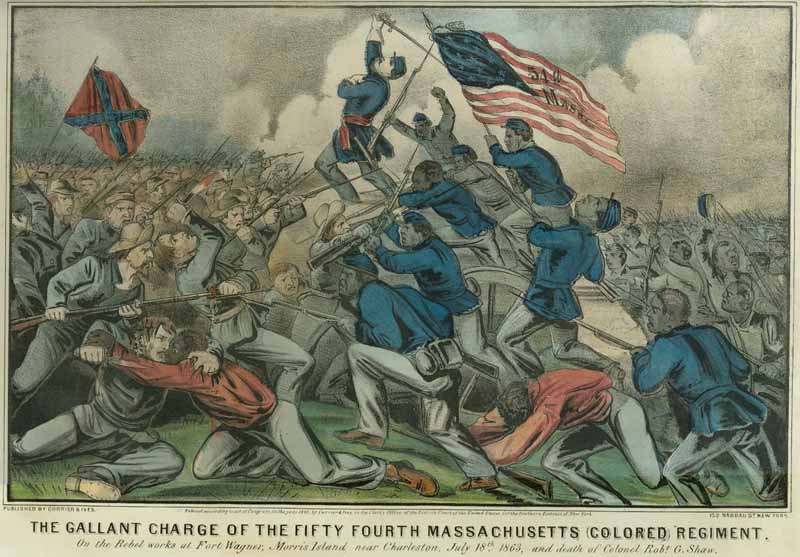 On July 16, 1863, at James Island, South Carolina, Corp. Samuel Wells and John Davis were wounded. John W. Dickinson was captured. All three were Galesburg men. The disastrous assault on Fort Wagner at Morris Island, South Carolina, on July 18, 1863, resulted in the loss of several officers, including Colonel Robert Gould Shaw. Over 125 men were wounded and more than 100 were missing. Henry Kirk and Preston Williams of Galesburg were wounded, and Kirk was captured. Additional losses were suffered on February 20, 1864 at Olustee, Florida. The regiment mustered out on August 20, 1865.

The film Glory (Tristar, 1989, Matthew Broderick as Colonel Robert Gould Shaw) is based on the regiment's service.

Men from Knox County served their country in the war with Spain. The book Annals of Knox County: commemorating centennial of admission of Illinois as a state of the Union in 1818 has information about participants from county townships.

"Praise for Colored Soldiers" from the Galesburg Republican-Register, 24 Oct. 1898

'Colored Workers at The Shop' photograph taken from The Honor Roll