Hiram Rhodes Revels was the first African American to serve in the United States Senate. 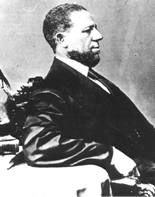 Hiram Rhodes Revels attended Knox College's preparatory academy in 1856-57. It was his last year of formal education and a time of great abolitionist fervor at the College. Prior to coming to Knox, Revels had been imprisoned in Missouri for preaching to blacks. He later became the first black pastor of the Madison Street Presbyterian Church in Baltimore. During the Civil War, he helped organize Maryland's first two black regiments for the U.S. Army.

In 1868, Revels became an alderman in Natchez, Mississippi. In February 1870, he was elected from Mississippi to the United States Senate. Senator Charles Sumner of Massachusetts made the closing argument for Revels' admission, declaring: "All men are created equal, says the great Declaration, and now a great act attests to this verity. Today we make the Declaration a reality."

Among his actions as senator, Revels voted to forgive officials from the secessionist states, who had broken their oaths to uphold the Constitution. White leaders proceeded to systematically disenfranchise black voters, and Revels' term came to an end in March 1871. Revels returned to Mississippi, where he became the founding president of Alcorn College. He died in 1901, at the age of 78.