A look back at the founding of International Fair at Knox College in 1982, published in the Knox Magazine on the occasion of the 25th anniversary of the fair in 2006. 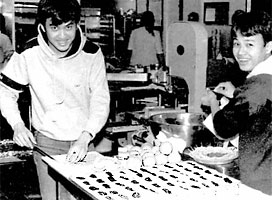 Knox's first International Fair in 1982 was less than half the size of the most recent festival, held on January 28, 2006, but its beginnings were neither small nor humble. The inaugural fair boasted booths from 12 countries, and it reflected Knox's growing interest in international education.

Shelley Roberts, former assistant dean of students and international student coordinator, began taking Knox students to other schools' international fairs in 1980. She and the students went to Urbana, Macomb, and Milwaukee, "to check them out," says Roberts, who worked at Knox from 1980 to 1985 and now lives in New Mexico.

From the start, Roberts said they planned that the International Fair would include cultural and educational displays, visiting speakers, and entertainers. And, of course, the fair would feature food from around the world-African, Asian, Caribbean, European. To the average Midwesterner, the names have been as exotic as the tastes -- snert (pea soup from the Netherlands), pulahari (South Indian tamarind and rice), boul go ghee (Korean sesame beef).

"The first year, we cooked the food in the basement of Post Hall," Roberts says. Ferrying food across campus to the Ford Center for the Fine Arts, "we spilled African ground meat stew in the back of Jack Fitzgerald's car," Roberts recalls. 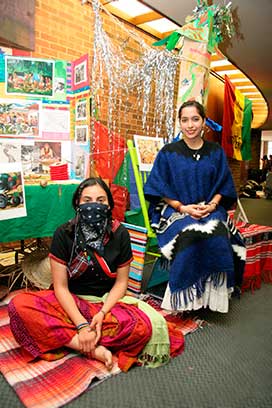 The College's Dining Services Department is now a full partner in the fair, providing the kitchen facilities and helping find ingredients. "Much of what used to be considered 'ethnic' is becoming mainstream and we can get 80 percent of the ingredients in Galesburg or through our normal suppliers," says Dining Services Director Steve Farris, who has worked with the fair for 20 years. "Some of the spice combinations are unusual," Farris says. "And one year, somebody made a dish with pigs' feet, which was pretty strange for us."

The fair has tripled in size, as Knox now draws students from more than 40 countries, up from 15 countries in the years before the fair. The event attracts more than 1,000 visitors to two locations -- more than 30 food tables in Seymour Union and an equal number of cultural booths in CFA.

"The International Fair is one of the things that I knew about Knox, before I came to Knox," says Cathy Walters, assistant dean of student for intercultural life. As part of the 25th anniversary, she is researching the history of international students at Knox. "The earliest I've found is Barnabus Root, who was from West Africa and graduated from Knox in 1870. He is one of the first black college graduates in Illinois."

The fair also provides a unique learning opportunity for the surrounding community. Regular visitors include high school students from the United States and abroad, sponsored by Rotary International. The service club plans its "Fun Weekend" for exchange students to coincide with International Fair, always held on the last Saturday in January.

"Food, music, conversation -- everything at the fair helps young people understand cultures from around the world," says John Heck, youth exchange officer for the Galesburg Sunrise Rotary Club. Links with Rotary and other community programs were initiated by Robert Seibert '63, Robert W. Murphy Professor of Political Science. "I had the experience of being an international student myself," says Seibert, who studied in the Philippines as a graduate student.

Seibert recalls that he and a handful of other American students at the University of the Philippines created a display on jazz for an international fair. "This was on a campus of 20,000, during the Vietnam conflict, and we were an instant minority," Seibert says. "It felt good to be able to present some of the strengths of American culture." Knox's International Fair "brings a human dimension to intercultural and international relations," Seibert says. "It's a lot easier to address international affairs if we have a basic understanding of the people we're dealing with."