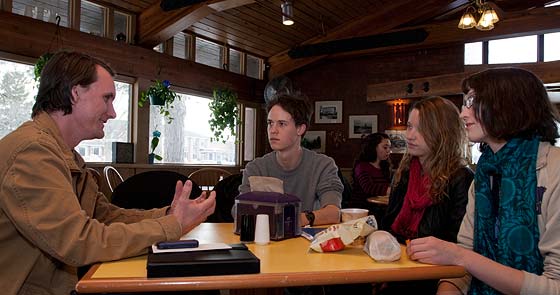 Ross Kelly, co-director of Cornerstone Children's Home in South Sudan and one of our Nick Adams award winners, meets with Knox writing students on campus.

Knox's record of awards in the annual Nick Adams Short Story Contest extends from the first year, 1973, when two of our students were finalists, to the most recent competition in 2011, when three Knox students swept all the winner and finalist awards. In the fall of 2011, we asked some of our winners and finalists for updates on their professional success after Knox. Here's where they are now and what they're doing:

2009 -- Adam Soto, graduate student in writing
"I graduated from Knox in 2010 as a double major in art history and creative writing. I am currently an MFA candidate at the University of Iowa Writers' Workshop, where I divide my time between instructing courses in literature and creative writing, and working on a collection of short stories. This past summer I interned with fellow Knox alum, Audrey Petty, helping compile interviews for her forthcoming book from the McSweeney's Voice of Witness series, High-Rise Stories: Voices from Chicago Public Housing."

2003 -- Ross Kelly, co-director, Cornerstone Children's Home, South Sudan
"From my experience as a teacher at a public school in the Mississippi Delta to my experience as a parent and leader at a children's home in South Sudan, I've often felt what I can only describe as the relentless aftereffects of my education. My college years helped me to gain a deeper understanding of the injustices in our world and sharpened my aspirations to fight those injustices with every ounce of my spirit."

2002 -- Eileen G'Sell, lecturer in English, Washington University in St. Louis
"I received an MA in English and film at the University of Rochester in 2004 and, in 2006, an MFA in poetry writing from Washington University in St. Louis. I've had poems published in The Boston Review, Ninth Letter, Harp & Altar, Zone 3, Super Arrow, the American Poetry Journal, and the Parthenon West Review. In addition to teaching film, composition, literature, and creative writing at Washington University, I have served as publications editor for the Mildred Lane Kemper Art Museum in St. Louis. In 2010, I initiated a book club at the Herbert Hoover Boys and Girls Club of North City, where I have been a mentor since 2004."

2000 -- Jen Tynes, instructor in writing and literature
"I earned a PhD in literature from the University of Denver and an MFA in literary arts from Brown University. I am the founding editor of Horse Less Press and the author or co-author of several books and chapbooks, most recently Heron/Girlfriend, published by Coconut Books, and, with Michael Sikkema, Autogeography, published by Black Warrior Review. I live in Grand Rapids, Michigan, where I teach writing and literature classes."

1998 -- Leah Chamberlain, educator, graduate student
"I taught middle school in the Adams 50 school district in Colorado for five years and elementary school in Adams 12 school district for six years. I attended graduate school at the University of Wales, Cardiff in 2003-2004 for teaching and practice of creative writing, earning an MA with distinction. I've just been accepted into a master's program in literature at the University of Stirling to study modern Scottish writing during the 2011-2012 school year."

1996 -- Aaron Cohn, behavior specialist, Beverly Farm Foundation, Godfrey, Illinois
"I received my MFA in fiction writing from Washington University in St. Louis in 2002, and then completed an MA in English and American literature. I taught English at McKendree University for several years, then changed fields and earned an MA in clinical psychology from Southern Illinois University Edwardsville in 2010. Since December of 2010 I have been a behavior specialist at a residential facility for adults with intellectual and developmental disabilities, Beverly Farm Foundation in Illinois."

1993 -- Josh Stevens, publisher, Reedy Press, St. Louis, Missouri
"I've worked as an editor for the Missouri Historical Society Press, and I'm now publisher of Reedy Press in St. Louis. I was grateful to the judge of the Nick Adams contest on several levels. Somehow I had managed to deplete my bank account as a senior, so winning first prize kept me afloat through the end of the academic year. I credit [professor and creative writing program director] Robin Metz, more than anyone, for my development as a writer at Knox. No one was more supportive or invested. I also thank David Amor [instructor and co-director of the journalism program] for a critique of a story I wrote for the Knox alumni magazine. It contained an observation about mechanics that instantly made me a better writer. I'm sure that David has no clue what I'm talking about, but please accept my gratitude nonetheless."

1987 -- Paul Andrew E. Smith, director of quality and continuous improvement, Colony Display Systems, Elgin, Illinois
"After Knox I got my MA in the writing workshop at the University of Illinois-Chicago. I spent several years in the art business, teaching English and working as editor for Fresh Ground Magazine. My big break came when I went to work for a manufacturer of components for medical, automotive, hydraulic, and military applications. I am currently the director of quality and continuous improvement for one of the biggest manufacturers of retail display fixtures in the country. I credit my success in the manufacturing industry to the skills I developed at Knox in the writing workshop: logic, problem solving, empathy, vision, flow. I still write and shop poetry and fiction now and again. I also teach traditional Chinese martial arts and play guitar in my band Wife Hits Moose, which is named after the Thomas Lux poem."

1982 -- Sheila McIntosh, translator, editor and lecturer in Spanish, Boston College
"I teach Spanish and serve as an academic advisor to undergraduates at Boston College. I enjoy having the opportunity to mentor students as I was mentored at Knox. I still have the handwritten letter that Robert Hellenga, not yet a well-known novelist, sent me the summer before my freshman year; it made a huge impression on me."

1980 -- Anne Johnson Veague, founder and curator, Waterline Writers, Batavia, Illinois
"I didn't find out I'd won the 1980 Nick Adams Prize until spring of '81 due to the death of the original judge, which I'm told had nothing to do with reading my story. By then I'd been hired to write documentation for a hotshot software company where my background in writing fiction was considered a plus and there was beer in the pop machine in the back room. (We were free to partake as soon as our boss did -- usually around 11:48 a.m.) When we went out of business (and he headed to Taiwan to escape some sort of tax situation), I was eight months pregnant, then had two more children in the blink of a very glazed eye. One afternoon, stranded in a blizzard with seven or eight children running around the house singing Christmas songs after Christmas, everything came to a standstill, and I sat down and wrote a story for the first time in 10 years. I'm working on my collection of short stories, and I'm a founder and curator of Waterline Writers, a reading event held at Water Street Studios art gallery in Batavia. On the third Sunday of each month at 7 p.m., we host six readers (all kinds of writing) and an audience of about 75 people. I love working with the writers and curating the events -- finding the best pieces and arranging them so that each piece builds on the others. View Vimeos of our readings at www.waterlinewriters.org. We love Knox writers, so submit your best work to waterlinewriters@gmail.com and join the list of Waterline alumni."

1978 -- Sue Rowe Doe, professor of English, Colorado State University
"Winning the Nick Adams was a huge door opener. I also remember tying up my running shoes and going for a long, ecstatic run all over Galesburg! After graduating from Knox in 1979, I went to the University of New Hampshire where I obtained a master's in creative writing. I then embarked on a 25-year career of teaching all over the country and raising three children, including Adam who graduated from Knox in 2004, while my husband Bill served on active duty with the U.S. Army. I have taught rhetoric and composition at Colorado State University since 2007. My research lies in three areas: the rhetorics of academic labor; the re-integration of veterans returning to college following service in Iraq and Afghanistan; and the use of writing as a means for developing critical thinking across the curriculum."

1973 -- John Hughes, retired educator, Chicago
"After Knox, I went on to graduate school at the University of Chicago. From 1977 until I retired from teaching in 2008, I taught in Galesburg District 205. During the 1990-91 school year, I taught in Northern Ireland as part of the Fulbright Teacher Exchange Program. From 1982 till 1995, I was an editor of Farmer's Market, a literary magazine that received numerous Illinois Arts Council grants and one National Endowment for the Arts grant. Currently, I am writing and also working part-time for Knox as a supervisor of student teachers in the Chicago Public Schools."

Over winter break, Shuchita Poddar '22 spent almost 5 weeks in Dubai as a brand and communications intern for FlyDubai, an airline service. 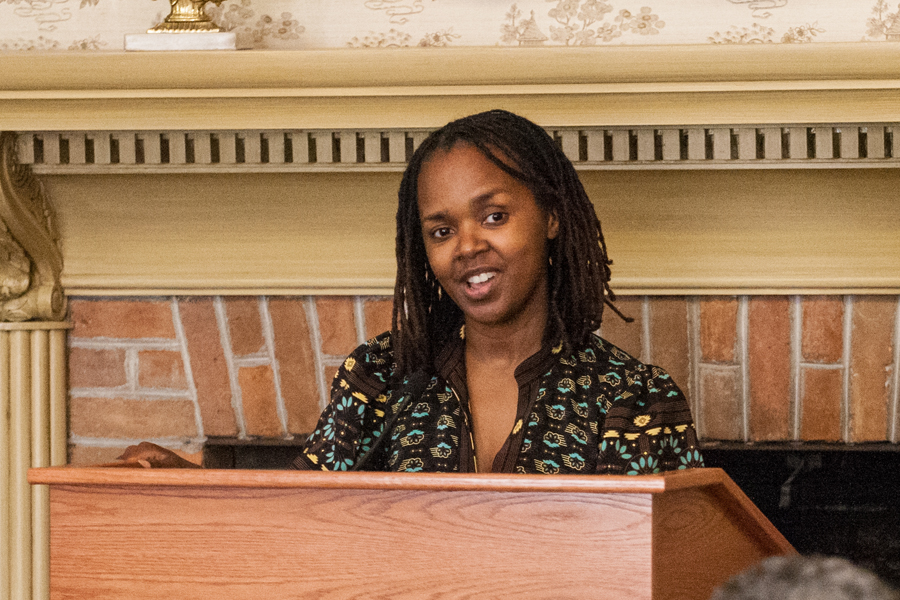 Audrey writes fiction, poetry, and nonfiction and teaches English at University of Illinois at Urbana Champaign