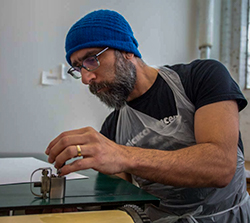 General Interests
"I often think of clay hills, d'Adamo walking backwards, or riding his wagon full of seedlings, reciting proverbs and tales to those doing the planting, such as my father and grandfather. Come on boys, know the one about Cilacchiatt'-who tied chickens to his belt? End of the row and I'll tell you how he fared-jumping from a fifth floor window.

American Massif, a collection of poems, published by Tupelo Press.

"American Mastodon in which the conceit of himself weighs on his prospects for happiness,

What Students Say
"One of the reasons Nick succeeds at inspiring students lies in his insistence that they write what they would not write and read what they would not read. That he is an impressive cook, an accomplished chalkboard sketch artist, and has great taste in music, is not unrelated; that is to say, it is through Nick's concept of entire learning that his students come to understand why poetry matters."
-Thomas Cook, Creative Writing Major