In the 1830s, Rev. George Washington Gale, a Presbyterian minister from upstate New York, inspired a band of colonists to set out for the prairies of Illinois to establish an educational institution that would be known as Knox Manual Labor College. By 1836, Rev. Gale had released his "Circular and Plan," which formally declared his intentions regarding the incorporation of a "Prairie College" -- as Knox was first known -- to potential subscribers. 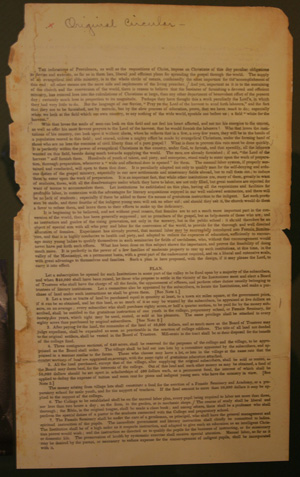 Text of the Circular and Plan

At right: a copy of the original Knox Circular and Plan on display in Old Main. Click image to view large version.

The indications of Providence, as well as the requisitions of Christ, impose on Christians of this day peculiar obligations to devise and execute, as far as in them lies, liberal and efficient plans for spreading the gospel through the world. The supply of an evangelical and able ministry is, in the whole circle of means, confessedly the most important for the accomplishment of this end; all other means are the mere aids and implements for the living preacher. And yet, important as it is to the sustaining of the church and the conversion of the world, there is reason to believe that the business of furnishing a devoted and efficient ministry has entered less into the calculations of Christians at large than any other department of benevolent effort of the present day; certainly much less in proportion to its magnitude. Perhaps they have thought this a work peculiarly the Lord's, in which they had very little to do. But the language of the Savior, "Pray ye the Lord of harvest to send forth laborers," and the fact that they are to be furnished, not by miracle, but by slow progress of education, proves that we have much to do, especially when we look at the field which our country, to say nothing of the wide world, spreads out before us; a field "white for the harvest."

Who that loves the soul of men can look on this field and not feel his heart affected, and not tax his energies to the utmost, as well as offer most fervent prayers to the Lord of the harvest, that he would furnish the laborers? Who that loves the institutions of his country can look upon it without alarm when he reflects that in a few, a very few years, they will be in the hands of a population reared in this field; and reared, unless a mighty effort be made by evangelical Christians, under the forming hand of those who are no less the enemies of civil liberty than of a pure gospel. What is done to prevent this ruin must be done quickly. It is perfectly within the power of evangelical Christians in this country, under God, to furnish, and that speedily, all the laborers wanted on this field, besides doing much towards supplying the world. The men are already furnished; if not, "the Lord of the harvest" will furnish them. Hundreds of youth of talent, and piety, and enterprise, stand ready to enter upon the work of preparation, through preparation, whenever a "wide and effectual door is opened" for them. The manual labor system, if properly sustained and conducted, will open to them that door. It is peculiarly adapted not only to qualify men for the self-denying and arduous duties of the gospel ministry, especially in our new settlements and missionary fields abroad, but to call them out, to induce them to enter upon the work of preparation. It is an important fact that while other institutions are many of them greatly in want of students, these, with all the disadvantages under which they have to labor, are not only filled, but great numbers rejected for want of means to accommodate them. Let institutions be established on this plan, having all the requisitions and facilities for profitable labor, in connection with the advantages for literary acquisitions enjoyed in our well-endowed seminaries, added to these means of gratuitous instruction to the indigent. Let such provision be made, and three-fourths of the indigent young men will ask no other aid; and should they ask it, the church will do them a favor to refuse them, and leave them to their efforts to make up the deficiency.

It is beginning to be believed, and not without good reason, that females are to act a much more important part in the conversion of the world than has been generally supposed; not as preachers of the gospel, but as help-meets of those who are, and as instructors and guides of the rising generations, not only in the nursery, but in the public school. It should therefore be an object of special aim with all who pray and labor for the conversion of the world, to provide for the thorough and well-directed education of females. Experiment has already proved that manual labor may be successfully introduced into female seminaries, and that it is highly conducive to health and piety, and adapted to reduce the expenses of education sufficiently to encourage many young ladies to qualify themselves in such seminaries for fields of usefulness, who, without that encouragement, would never have put forth such efforts. What has been done on this subject shows the importance and proves the feasibility of doing much more. It is perfectly in the power of a few families of moderate property to rear up such institutions, at this time, in the valley of the Mississippi, on a permanent basis with a great part of the endowment required and on a liberal and extensive scale with a great advantage to themselves and families. Such a plan is here proposed, with the design, if it may please the Lord, to carry it into effect.

2. Let a tract or tracts of land be purchased equal in quantity at least, to a town six miles square, at the government price, if it can be so obtained, and let this land, or so much of it as may be wanted by the subscribers, be appraised at five dollars an acre, on an average; every subscriber who shall purchase eighty acres, or half a quarter section, to be paid for by the money subscribed, shall be entitled to the gratuitous instruction of one youth in college, preparatory school, or Female Seminary, for twenty-five years, which right may be used, rented, or sold at his pleasure. The same privilege shall be attached to every eighty acres thus purchased by original subscribers. [See Note 2.]

3. After paying for the land, the remainder of the fund of 40,000 dollars, and as much more as the Board of Trustees may judge expedient, shall be expended as soon as practicable in the erection of college edifices. The title of all land not deeded to the original settlers, shall be vested in the Board of Trustees. Mill-seats in the tract shall be at their disposal for the benefit of the college fund.

4. Three contiguous sections, of 640 acres, shall be reserved for the purposes of the college and the village, to be appropriated as the Board shall order. The village shall be laid out into lots by a committee appointed by the subscribers, and appraised in a manner similar to the farms. Those who choose may have a lot, or lots in the village at the same rate that the quarter sections of land re appraised on average, with the same right of gratuitous education attached.

5. All land purchased, except that of the village, after supplying the original subscribers, shall be sold or rented, as the Board may deem best, for the interests of the college. Out of this land and such other money as may be obtained, a fund of 50,000 dollars should be set apart in scholarships of 400 dollars each, as a permanent fund, the interest of which shall be applied to defray the expense of tuition and room rent for pious and indigent young men who have the ministry in view. [See Note 3.]

The money arising from village lots shall constitute a fund for the erection of a Female Seminary and Academy, or a preparatory school for male youth, and for the support of teachers. If the fund amount to more than 50,000 dollars if may be applied to the support of the college.

6. The College to be established shall be on the manual labor plan, every pupil being required to labor not more than three, nor less than two hours a day; on the farm, in the garden, or in mechanic shops. The course of study shall be liberal and thorough; the Bible, in the original tongue, shall be made a class book; and among others, there shall be a professor who shall perform the special duties of a pastor to the students connected with the College and preparatory school.

7. The Female Seminary shall be under the care of a gentleman, as principal, who shall have the general management and spiritual instruction of the pupils. The immediate government and literary instruction shall chiefly by committed to ladies. The Institution shall be of a high order as it respects instruction, and adapted to give such an education as an intelligent Christian parent would wish; and the instruction so directed as to qualify the pupils for the business of instructing, or for missionary or domestic life. The preservation of health by systematic exercise shall receive special attention. Manual labor, so far as it may be desired by the parent, or necessary to reduce expense for the encouragement of indigent pupils, shall be incorporated with it. 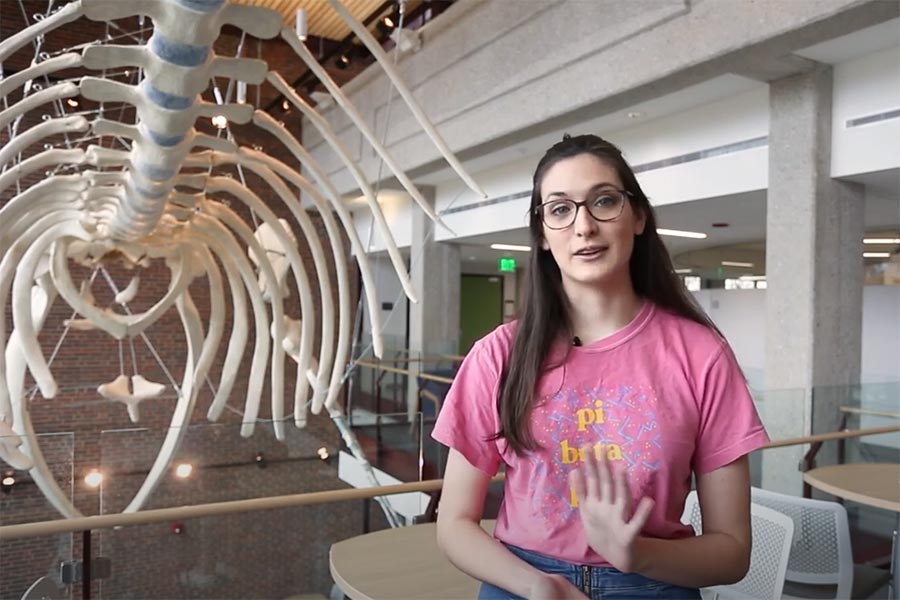 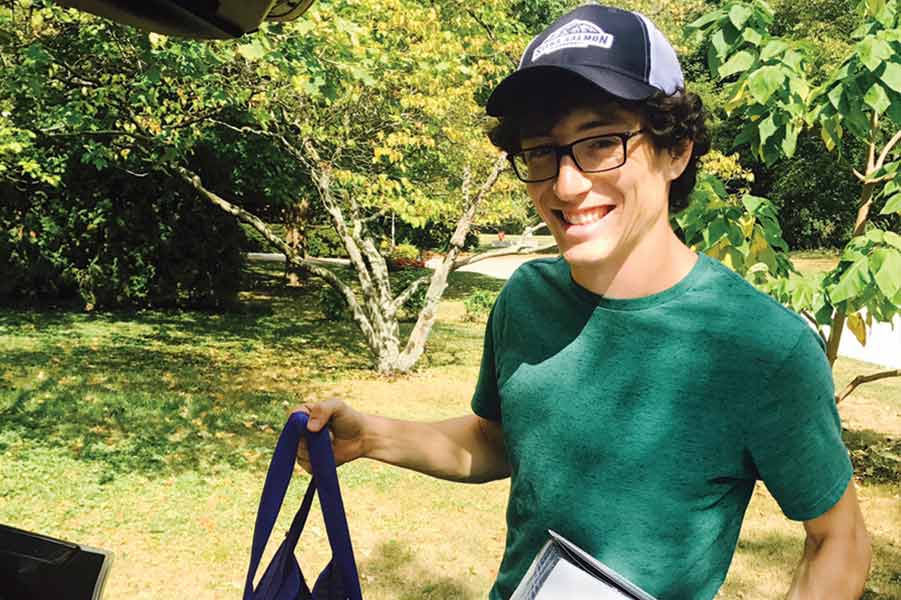 An internship in Anchorage, Alaska, led Sean to his current position with Sitka Salmon Shares in Madison, Wisconsin.

Student-Athlete, Charlie Gibbons, discusses how his experiences at Knox influenced his athletic and academic ...